Deep eutectic solvents can be used as a spinning medium for producing wood fibre yarn without dissolution. We constructed a modular prototype spinning line, where process critical parameters could be measured and controlled. We studied the influence of various spinning parameters and  were able to increase the load bearing capability and decrease the linear density of the yarn.

An inclined channel with an ethanol flow is used to induce draw on the incipent yarn. By adjusting the angle of the channel and flow rate of ethanol of ethanol yarn can be continuously spun.

The inclined channel spinning approach was shown to both reduce the linear density and increase the load bearing capability of the yarn. Linear densities were reduced from 21-24 tex to approximately 13 tex. Tenacities were improved from the previously reported 5.3 ± 1.8 cN/tex to 7.5 ± 0.3 cN/tex

Wood fibre yarns have possible applications in textiles, non-wovens and composites. For example pulp based wet-laid nonwovens could be produced by using wood fibre yarn instead of synthetic or viscose fibres. 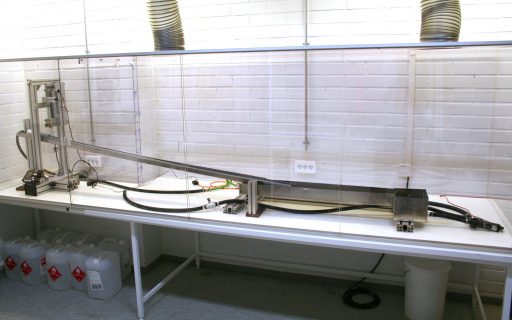